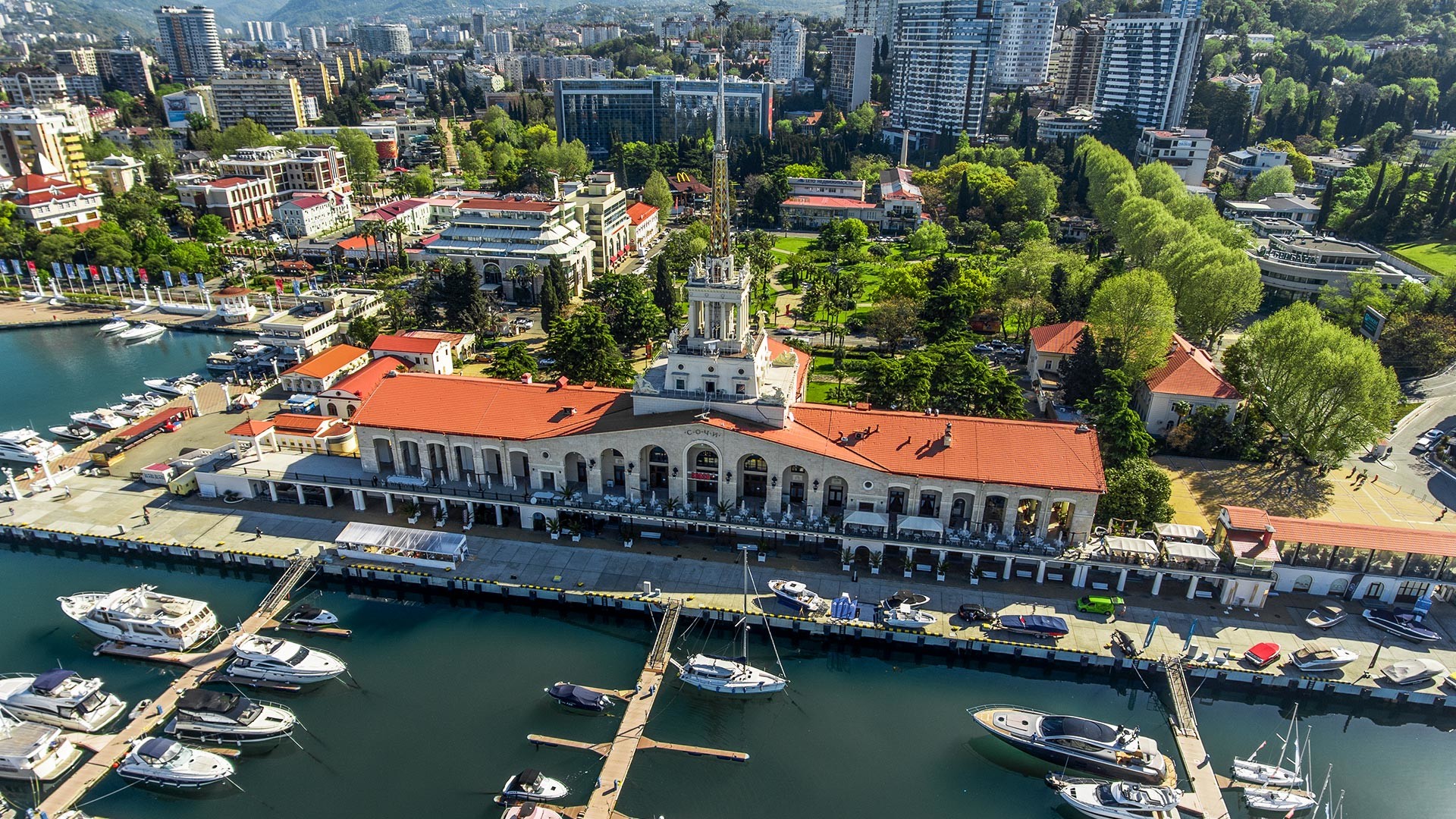 Nikolay Gyngazov/Global Look Press
The mix of Soviet and modern architecture makes this Black Sea resort one of the most beautiful cities in Russia. 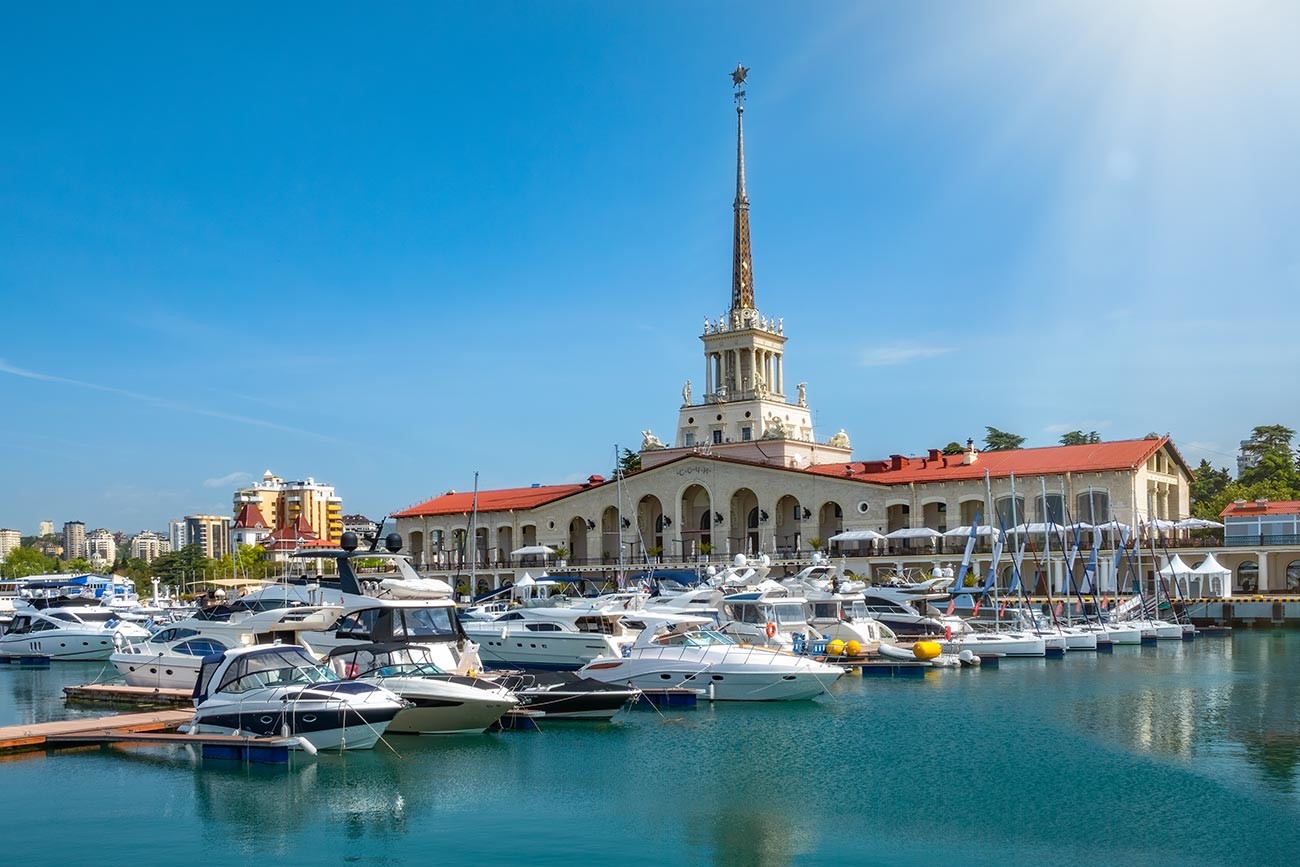 The Black Sea is arguably the main attraction in Sochi. And the main architectural gem of the city is the Commercial Sea Port of Sochi.

To those who have been to St. Petersburg, the central spire of the port will remind them of the Admiralty building in Russia’s northern capital. This is because the Sochi Port’s spire was inspired by it.

Like many other iconic Soviet buildings in Russia, Sochi's seaport — constructed in 1955 — is an example of the Stalinist Empire style of architecture. The port never freezes and is capable of admitting cruise ships up to 300 meters long. 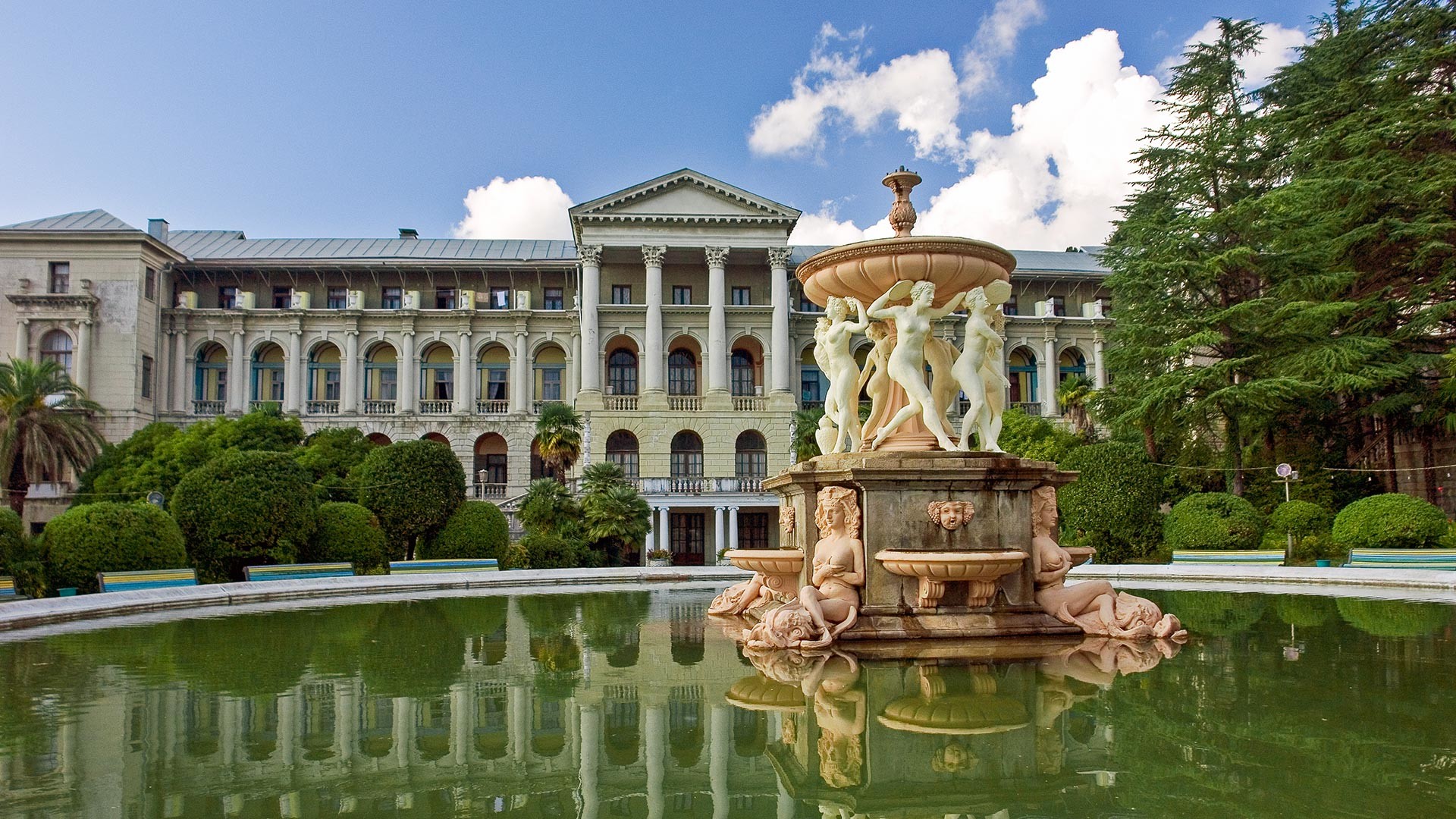 This is one of Sochi’s most iconic buildings and an architectural attraction for locals and tourists alike. Constructed in 1937, the sanatorium is currently abandoned and therefore provides visitors with a unique atmosphere that some describe as a “journey back to Soviet times”.

This building, in the time of the USSR, accommodated Soviet workers who were lucky to receive vacation vouchers to the sunny city through the labor union office. 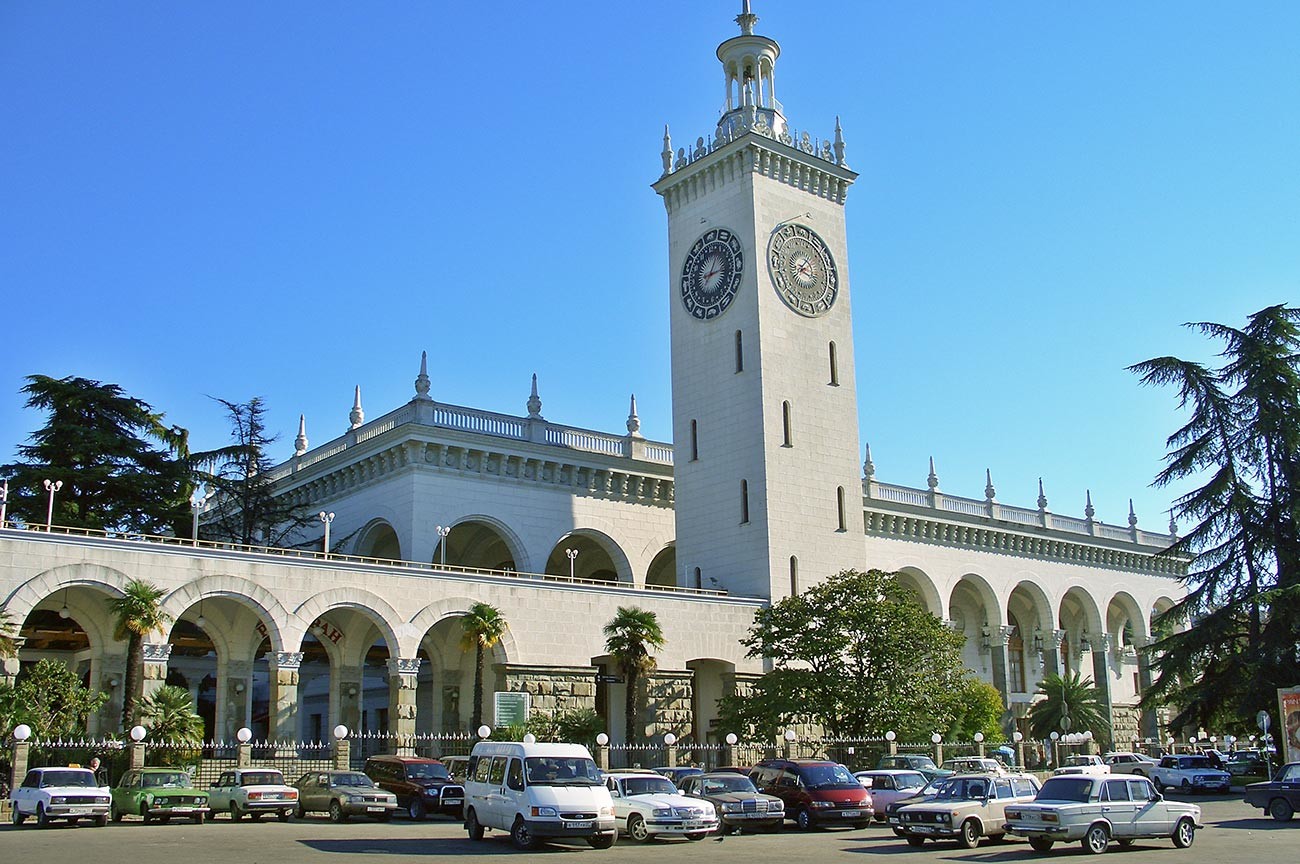 Sochi was a highly popular coastal city among the USSR’s vacationers, but also one of Joseph Stalin’s favorite places in the Soviet Union. It is known that the dictator preferred traveling by train rather than by air, and therefore the construction of a solid and modern railway station was paramount at the time.

The station — that was built in 1952 — is located in the city center and within a walking distance to Sochi’s Sea Port and the city’s coastline.

The station’s architectural pearl is a clock tower. In 1975, the Sochi railway station became listed as an architectural monument of federal importance.

4. The main grandstand of Sochi Autodrom 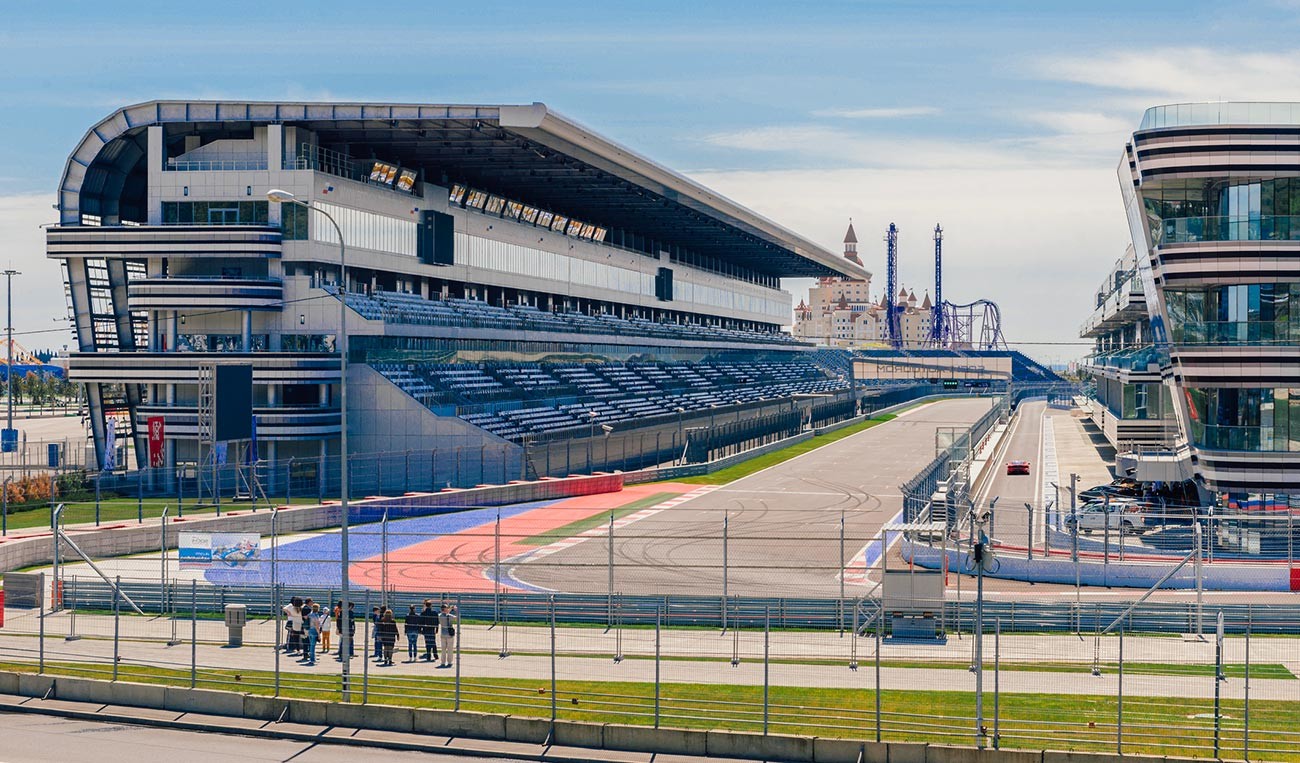 Sochi Autodrom race track is a brand new circuit that has hosted the Formula 1 Russian Grand Prix every year since its inception in 2014.

Its main grandstand — with a luxurious lounge for VIP guests — is an imposing modern building that is located along the start-finish straight. A giant roof covers the grandstand’s visitors from the elements and harsh sunlight, but also serves an aesthetic function. 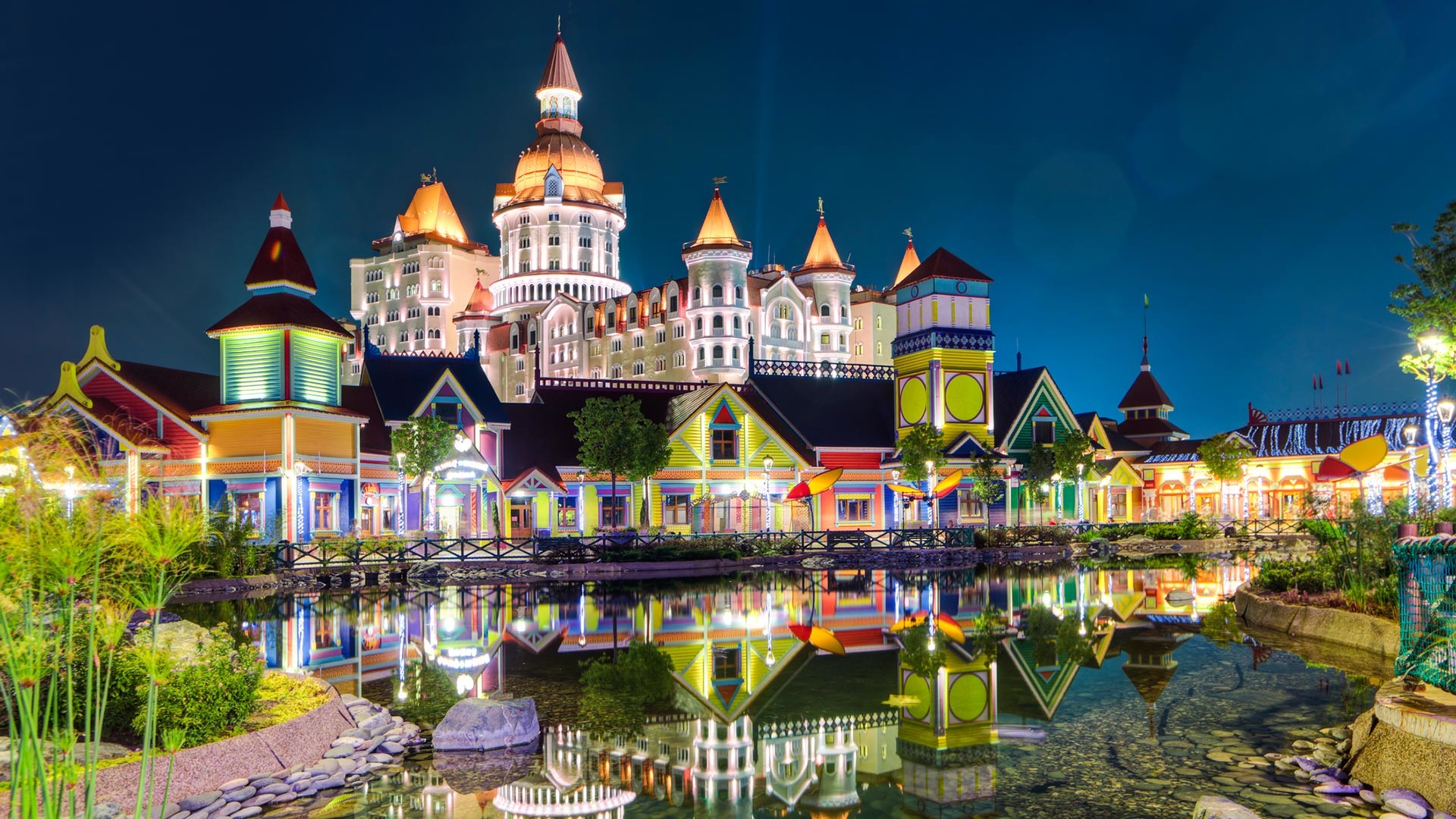 This hotel is stylized as a medieval castle and stands as the central architectural piece of a wider local attraction: the Sochi theme park that explores Russia’s cultural heritage in a modern and entertaining way.

The four-star Bogatyr hotel opened its doors for the first time in 2014, for the arrival of guests of the Sochi Winter Olympic Games.

6. The Church of the Savior Not Made by Hands (aka the Olympic Church) 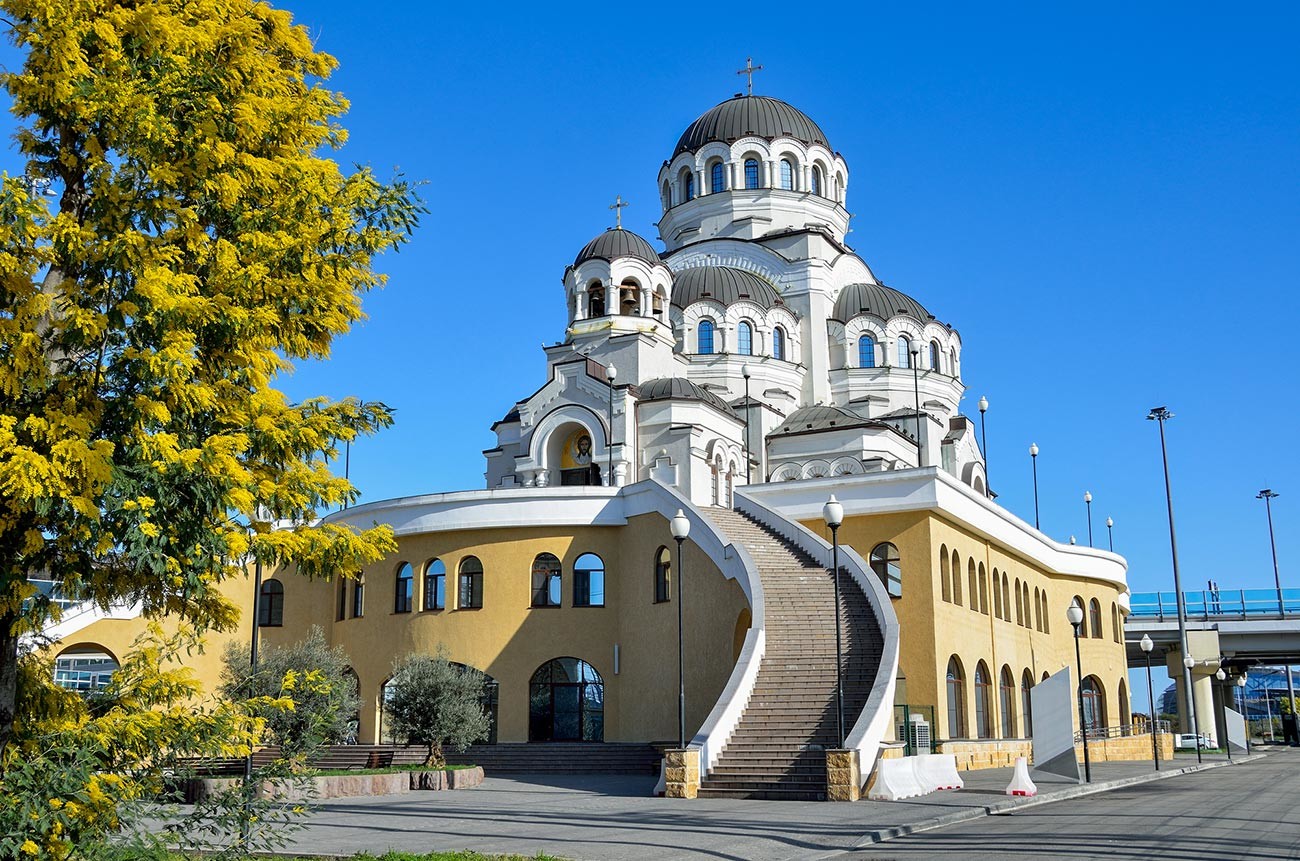 At the base of this striking church — constructed in 2014 — lies a stone extracted at the excavation site of an ancient 9th-century church that was located in the area.

The Olympic Church is designed in the Neo-Byzantine architectural style, which combines the Byzantine style with Orthodox Christian architecture, reminiscent of Constantinople (now Istanbul).

In all other respects, this is a modern building appealing to an eye, especially considering that it is beautifully surrounded by highways connecting the city center with the Adler district. 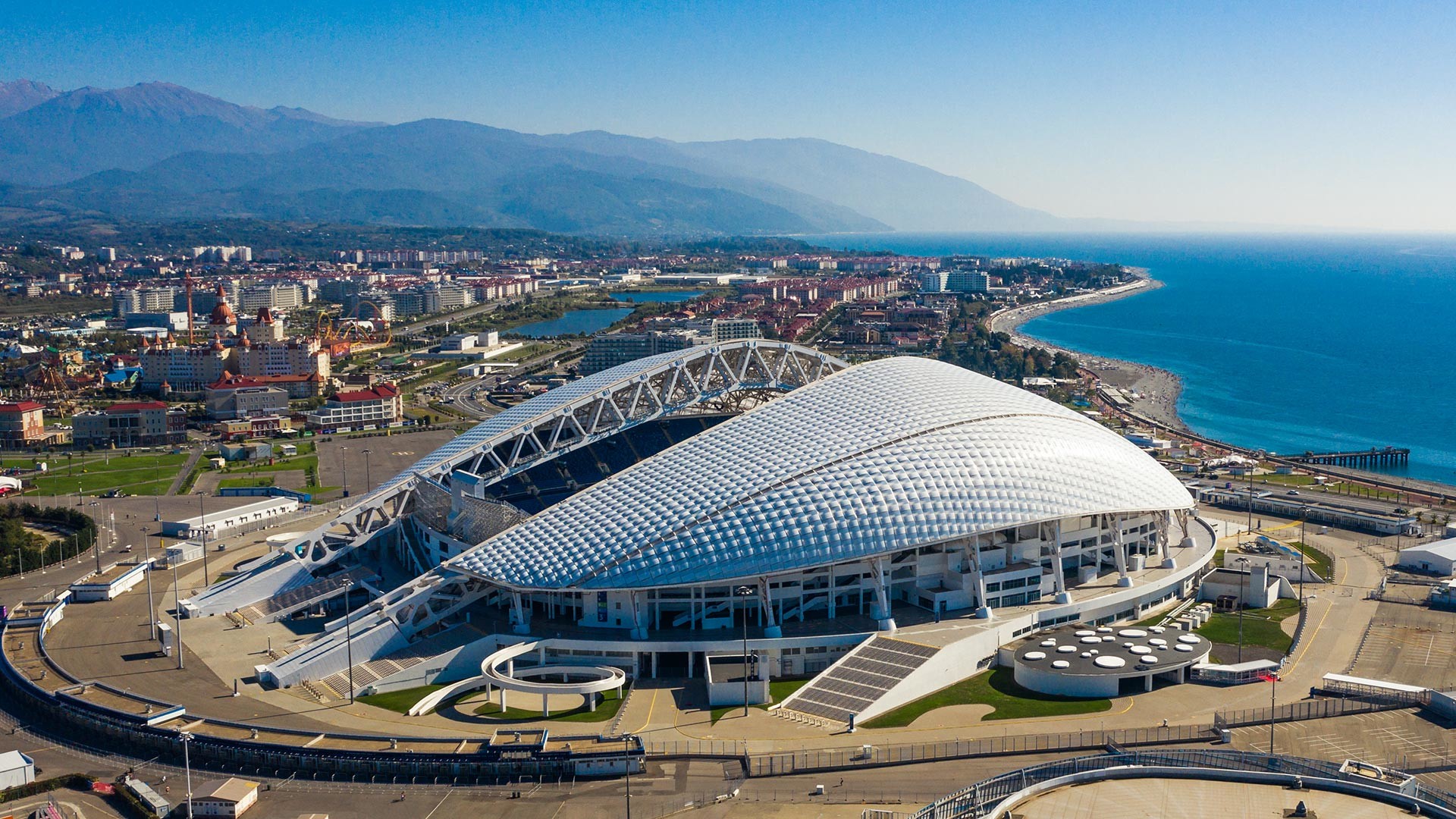 Named after the Mount Fisht peak located in the western Caucasus Mountains, this stadium was constructed just in time to serve as the venue for the opening and closing ceremonies of the 2014 Sochi Winter Olympics. Later, the stadium was converted to host games of the 2018 FIFA World Cup in Russia.

Curiously, the stadium’s roof was designed to resemble snowy mountain peaks, a typical terrain in the area. The stadium’s roof opens to the north and the south allowing a clear view of Krasnaya Polyana mountains and the Black Sea, respectively. 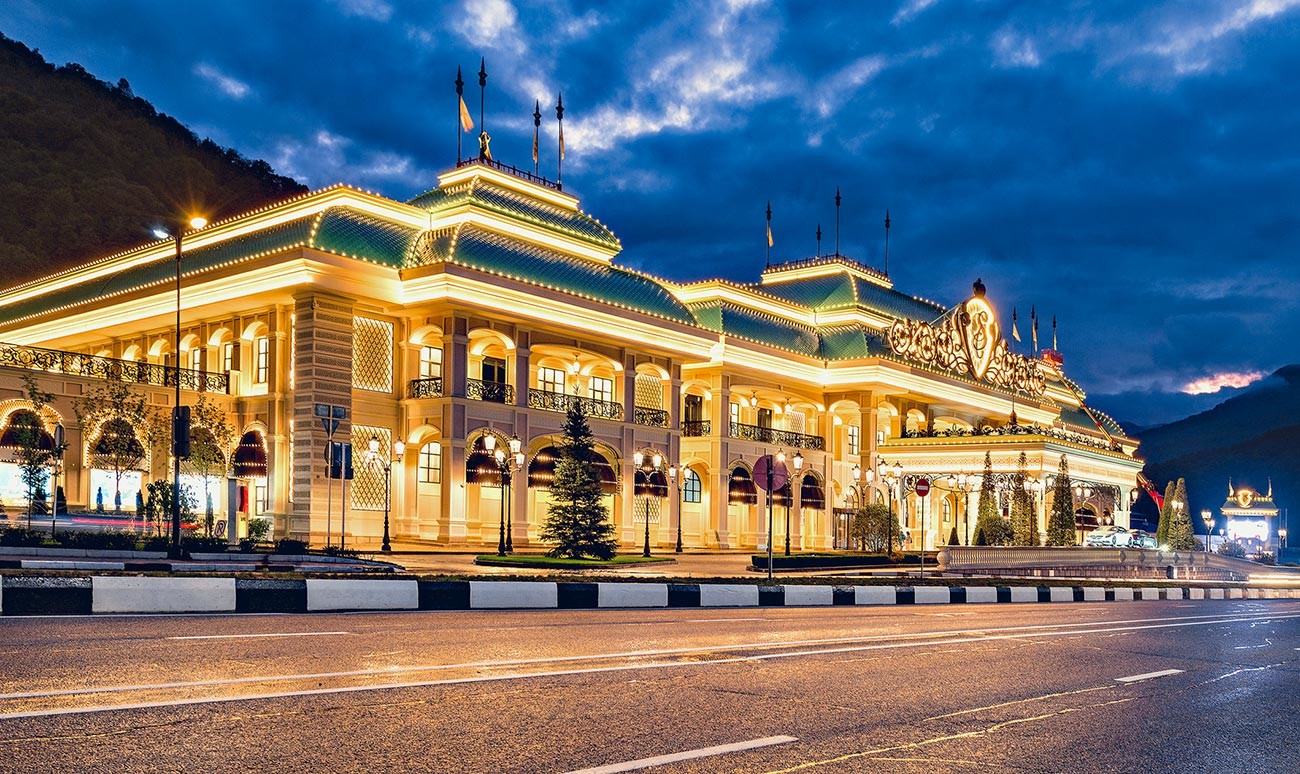 This posh two-story building — opened in 2017 — hosts the most fashionable casino in the Krasnaya Polyana gambling zone, one of four in Russia.

Luxurious both on the outside and inside, the casino is one of the first buildings that visitors of the Krasnaya Polyana encounter when they enter the mountainous resort by car.

The extravagant and attractive building hosting the casino adjoins the building of the Sochi Marriott hotel that was, curiously, rated as one of the ugliest buildings in Russia. 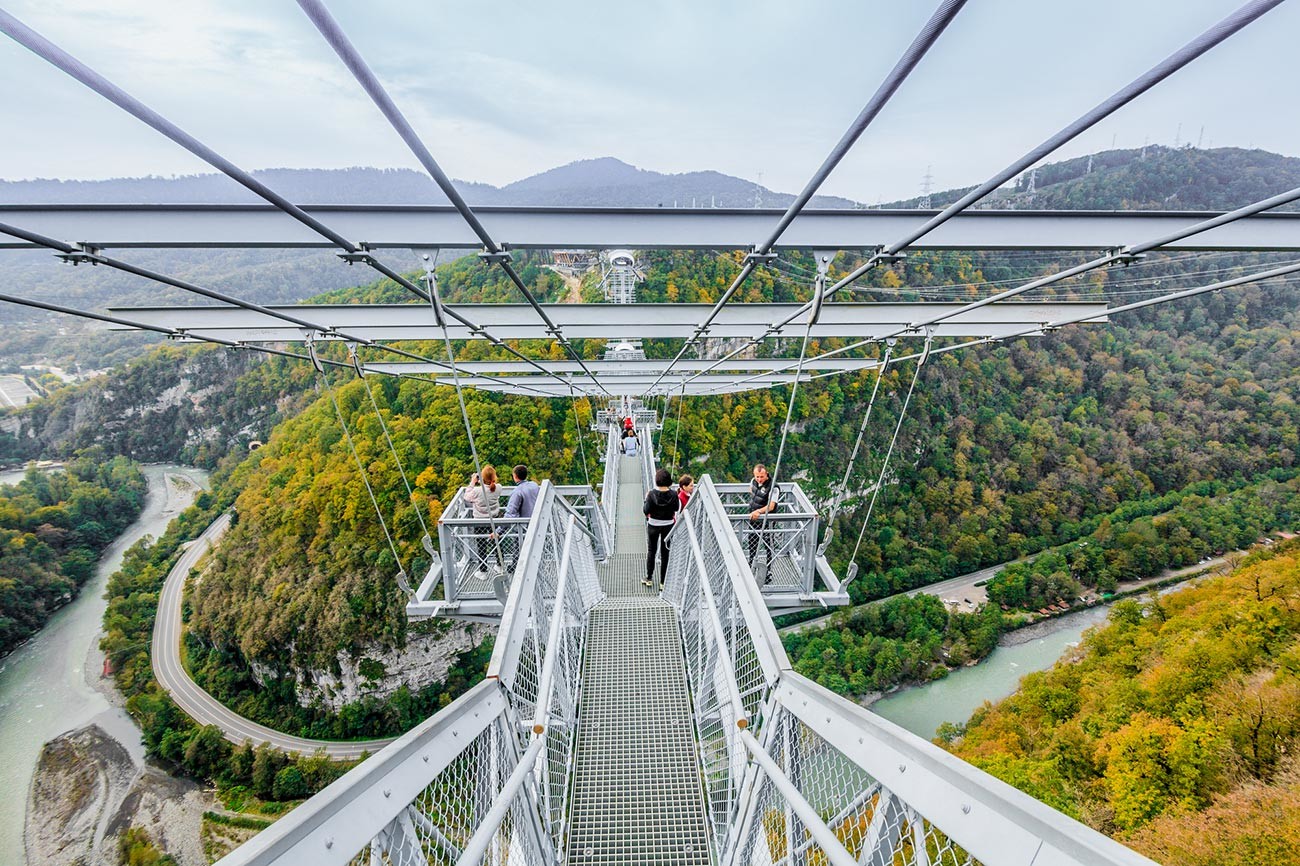 One of the world’s longest pedestrian suspension bridges — 439 meters in length — was constructed by an international company based in New Zealand. It lies across the valley of the Mzymta River in Sochi. Those walking on it will enjoy a magnificent view of mountains and the Black Sea more than 200 meters above the ground.

The bridge is equipped with two bungee platforms and offers other entertainment for adrenaline junkies.

10. The Town hall at Rosa Khutor 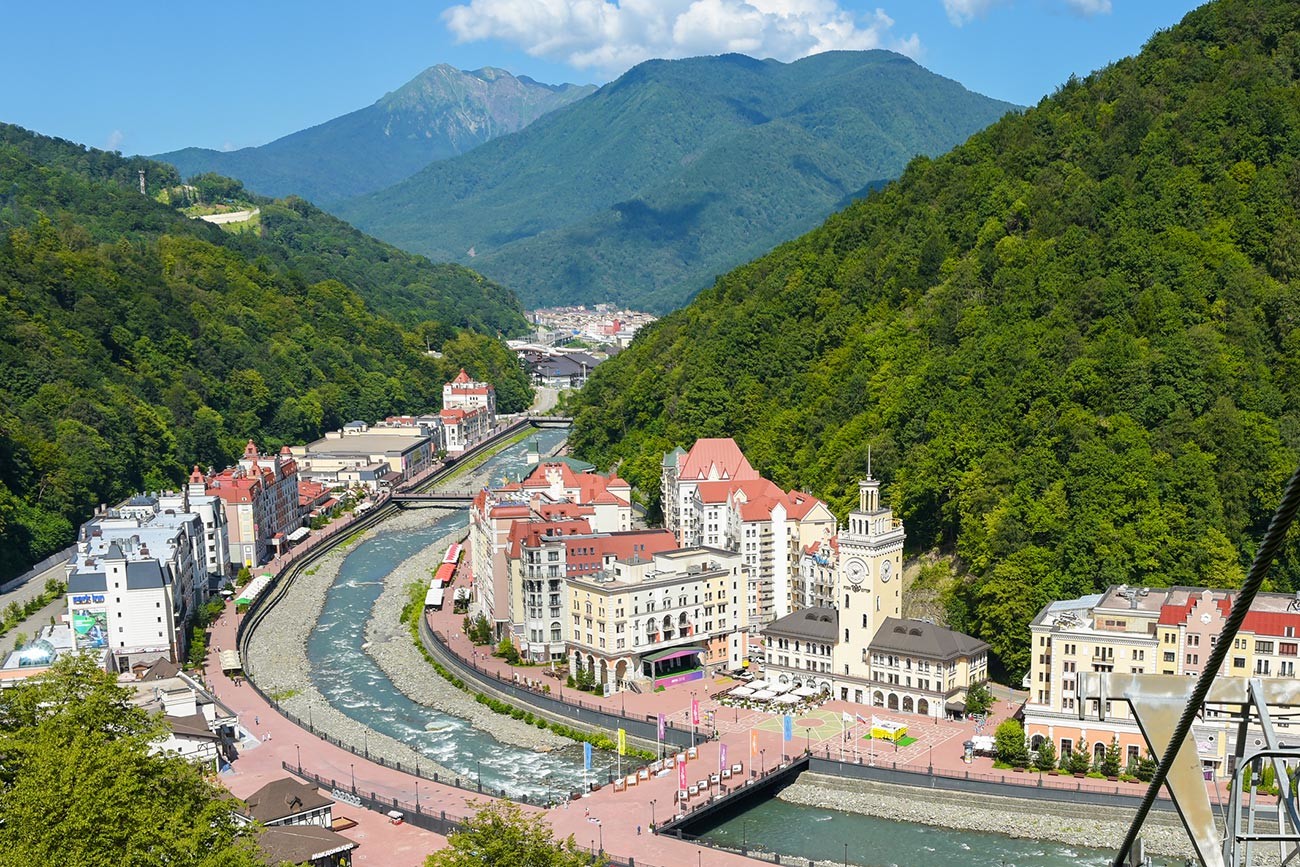 Rosa Khutor is Russia’s main ski resort in Sochi. It is a cluster of hotels, guest houses, squares, cable cars, and ski resorts located in a gorge between two mountains.

The town hall, the tallest building in the cluster, is the symbolic heart of the area: it is often used to navigate around the resort and is visible from far away. It has a high clock tower and the sign ‘Rosa Khutor’ can be seen under the clock.

The cluster, together with the town hall, heavily resembles a typical Alpine village, which might make visitors forget for a moment that they are in Russia and not in Europe.

Click here for the most beautiful buildings in St. Petersburg.