10 Russian words that are most often mispronounced 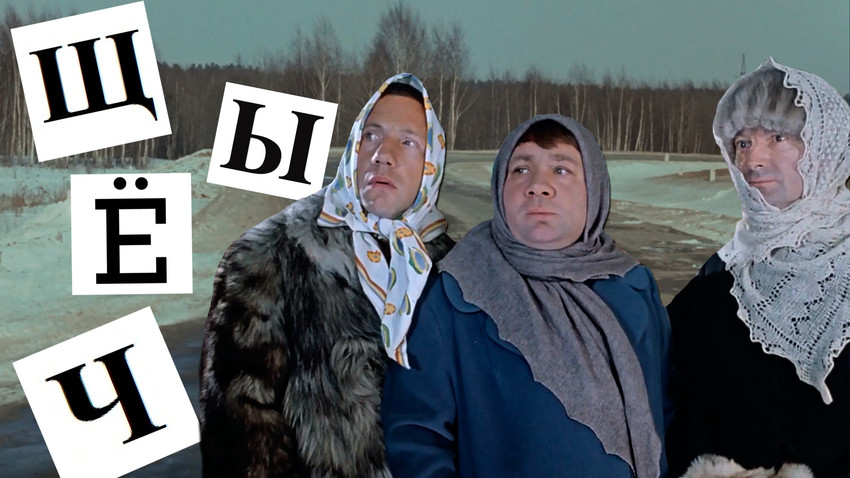 A still from the Soviet movie'Gentlemen of Fortune'

Alexander Sery/Mosfilm, 1971
Russian language isn’t an easy one per se, but these common cases are probably the most challenging for non-native speakers.

From the very beginning of a conversation, when all you need to say is: “hello”, you meet this monster that has three and then four consonant letters. You can literally break your tongue trying to pronounce this. The secret is that the first letter ‘В’ shouldn’t be pronounced. Be sure to put stress on the first syllable.

Wrong stresses are one of the most common mistakes, as there is no strict rule on how they are formed, while they can move from one syllable to the other, depending on the word form (for example single or plural). Foreigners used to pronounce “ba-bUshka”, but it is correct to say “bAbushka”.

All the main difficulties start when we meet Cyrillic letters that have no equivalent in the Latin alphabet. The letter ‘Щ’ is even transliterated into English in many different ways, that’s why you can meet ‘borsch’, ‘borscht’ and even ‘borsh’. Interestingly, in the surname of a Soviet leader this letter is transliterated as ‘shch’ - Khrushchev. By the way, there is another popular Russian soup with this letter - ‘shchi’ made out of cabbage.

The main difficulty in pronouncing this word is the monster letter - ‘Ы’. It is usually transliterated as ‘Y’ and foreigners often pronounce it as ‘ee’ by mistake. But try to pronounce it by shifting your lower jaw a little forward. Pretend you are lifting a very heavy dumbbell. Well, that’s something very common with Russian ‘Ы’.

The last letter ‘Ь’ is actually a soft sign that is an indicator that tells you the previous letter, in this case ‘T’, should be softened in the end. So when you manage to pronounce this rude ‘Ы’, you need to soften the ‘T’ at once. Often, translators transliterate the soft sign ‘Ь’ with a single apostrophe. It should be byt’.

This word contains another letter that could confuse anyone - ‘Я’ is actually the last letter in the Russian alphabet (so when you say “from A to Z”, we say “from А to Я”, or – in Russian – “от А до Я”). This letter is usually transliterated as ‘ya’ and when it stands after a vowel, you should pronounce it with the clear ‘y’ sound. It can be frequently met in female surnames - for example Leo Tolstoy’s wife is Sophia Tolstaya (Толстая). But when the letter Я stands before a consonant, it is still transliterated as ‘ya’ but this ‘y’ should hardly be pronounced. So ‘five’ should sound like ‘p’yat’ with a soft ‘p’ and then ‘ah’, and not like ‘pi-yat’ or anything else. Don’t forget to soften T in the end.

The letter ‘Ж’ is usually transliterated like ‘zh’ and actually sounds like the English ‘J’ in ‘Jacqueline’, not like in ‘jacket’. The trick of this word is that the letter ‘И’, which usually sounds like ‘ee’ in English (like in ‘meet’) should sound a little differently after ‘Ж’. It is pronounced as ‘Ы’. So keep in mind our tutorial from point 4 above, and don’t forget to soften the letter ‘H’ in the end.

The Russian monarch is usually spelled in two different ways - either czar (which actually shows its origin from the word ‘caesar’) and tsar (which is a common transliteration of the letter ‘Ц’ as ‘ts’). And non-natives frequently pronounce it by clearly splitting the sounds ‘t’ and ‘s’ or ‘c’ and ‘z’, while it is one letter and should be pronounced tightly together, like ‘c’ in ‘infancy’.

The Russian ‘R’ isn’t easy, either. Moreover, roaring as a tiger to pronounce it in this case you also need to soften it at the end. Sorry!

Russian letter ‘Е’ is pronounced like ‘ye’ in English (like in ‘yellow’) when it stands after a vowel. When there is a consonant before ‘Е’, the ‘y’ shouldn’t be pronounced. So, in the case of ‘девочка’, you need to balance between the sounds ‘ə’ and ‘ye’. That’s not so complicated, you need just to soften the ‘D’, so that it sounds like ‘D’ə’.

As the stress is put on ‘Е’, the letter ‘O’ should not be pronounced clearly as ‘Oh’, but it almost disappears, leaving only something like ‘ah’.

Then there is not only the letter ‘Ч’, but also two consonants in a row. You have to say it with no pauses or other sound between them – ‘chk’.

Given the fact that there are four letters that don’t exist in Latin alphabet, this word is a real challenge. We’ve already talked about ‘Ж’ (see p. 6). After that, we immediately encounter the letter ‘Ё’ which is a tricky one, as it is usually spelled without umlaut dots, but just ‘Е’. The letter ‘Ё’ should be pronounced as ‘Yo’ (like in ‘yogurt’). But it’s impossible to pronounce ‘Ё’ like in ‘yogurt’ after Ж, so it becomes just ‘O’.

We’ve already talked about ‘Ы’. It is usually transliterated as ‘Y’, but wow - here we also have ‘Й’, that is also transliterated as ‘Y’. And usually, Russian surnames that end with ‘ий’ and ‘ый’ are spelled in English just with just the letter ‘y’, so the pronunciation is closer to ‘ee’ (like in ‘Dostoyevsky’). But, we need to differentiate them and, in fact, it should be ‘Dostoyevskiy’. And here, we would suggest spelling it like ‘yi’ - Zholtyi (stress on the first syllable...).

Russian names are challenging in pronunciation (and we’ve written about the most commonly mispronounced examples). But, in this case, we would like to talk about the letters ‘Ш’ and ‘Щ’ - and their transliterations - ‘SH’ and ‘SHCH’. Usually, non-speakers pronounce them equally or very similar. However, they are different. ‘SHCH’ is a voiced consonant, while ‘SH’ is a voiceless one. Sasha and Masha should be pronounced as if they had ‘SH’ as in ‘champagne’, not like in borshch.